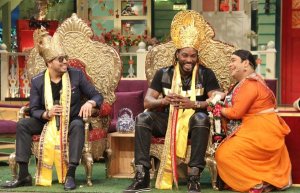 In the next episode of The Kapil Sharma show, none other than Chris Gayle will be seen with comedian Kapil Sharma. The West Indian cricketer shot for the episode on Friday night with Bollywood singers Mika Singh & Kanika Kapoor. A source from the set said, “The trio had a blast on the set. While everyone knows Gayle’s love for dancing on the field, he showed off his moves on stage as he grooved with the cast on various Bollywood songs. He also did Bhangra, sang songs & played cricket.” Kapil shared a picture on Twitter & wrote, “Meet my new mad friend Chris Gayle ‘Six Machine’. But couldn’t face my bowling in The Kapil Sharma Show. (sic)”. I am definitely looking forward to this one. Guys, don’t miss the episode. See inside pictures of the show & check out the video- behind the scenes: